I have always loved flowers (and gardening generally) and whiled away many a happy summer's day picking wild flowers in meadows and woods near to where I lived in southern Finland. These were then made into bouquets and posies for my mum and grandma; both of whom always seemed very pleased with my efforts.

My grandma lived on a farm and I can recall a derelict summer cottage nearby which garden was overgrown with lily of the valley. And yes, I can still smell those huge bouquets I used to gather each year!

The hedgerows and woodlands were filled with purple lupins, lacy shepherd's parsley, delicate wood anemones, willow herb and marguerites galore; all just ripe for the picking, while mum grew nasturtiums, marigolds, tulips, geraniums, petunias and cornflowers in our garden. We had several rose bushes too and I used to attempt perfume making each year - albeit unsuccessfully!

Because winters are cold and hard in Scandinavia, florists are kept busy with customers wanting to cheer themselves up with some colourful flowers, and my favourite florist was Blomsterhuset - a huge greenhouse-like building complete with a chiller room where all the cut flowers were kept. Such excitement entering that particular room and choosing some exotic blooms.

Etiquette demanded that you never went visiting without taking along a bunch, so I was regularly sent along to buy a bouquet or two. Although summer time, I favoured the local market place as many women would be there displaying charming wildflower bouquets created that morning.

When I arrived in England in 1981, flowers began to feature less frequently in my life simply because it didn't appear to be the norm to give flowers when visiting; and they were rather pricey too. Happily, since then, the continental tradition has taken root here too and flowers are now readily available here, there and everywhere.

When I handled my first floral foam brick at a flower arranging course many moons ago, flower design entered my life big time and boy am I glad it did! And now of course I can't wait to be given the opportunity to create something florally exciting just for you!

Having been a freelance writer since the mid 1990s, you may be interested to learn that in December 2018, I became the Editor of the BFA Magazine (the trade magazine for the British Florist Association) and I so relish meeting people from the worldwide flower community be it florists, wholesalers, distributors or consumers.

And just a month earlier, in November 2018, I was approached by the Belgian contemporary magazine Fleur Creatif and became involved with them too as their UK Editorial Adviser.

Before that I was Editor of Flora International magazine and spent three and a half wonderful years (January 2015 to October 2018) helping to increase its readership and making so many wonderful floral friends along the way.

Furthermore, I became a NAFAS Area Demonstrator for Sussex in January 2018 which means that I am now able to tour the south coast giving floral demonstrations to flower clubs large and small. The theme for my demonstrations in 2020 is entitled 'Colour Me Beautiful' and I very much hope that I might  bump into you at a flower club meeting soon...

And if you live in the Brighton & Hove area, you may consider coming along to some of my workshops or courses that I run be it at Varndean Adult Education or other venues.

And finally, having been a National Trust member for 25 years plus, I was utterly delighted in late summer of 2017 to have been accepted onto the volunteer flower arranging team at Nymans near Handcross in Sussex. I am now regularly asked to help create some beautiful floral displays in the various rooms in the house, together with other like-minded floral folk. What an incredible honour!

It would be fair to say that flowers rule my world! 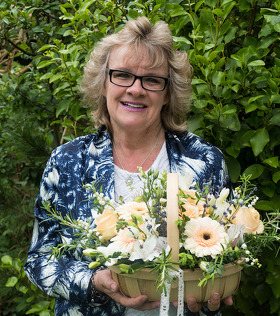