Debi and Lucas' wilderness wedding complete with a large marquee, live band, craft beers and Moroccan themed bell tents and even a double decker bus for their wedding night (The Big Green Bus), took place in a glorious location near Laughton in East Sussex.

A woodland setting such as this called for informal flower designs including numerous floral cupcakes, vintage china with gold sprayed gypsophila as well as jam jars filled with roses, lisianthus, delphiniums, agapanthus, hydrangeas and gypsophila. I also dried roses from my own garden and then glued them onto decoupage letters; a novel place setting for the happy couple. A picnic hamper filled to the brim with blousy blooms as well as a three tiered floral ‘fountain’ completed the ensemble within the bunting bedecked marquee.

As Lucas likes trees - especially the birch - I designed some birch sculptures (which design my lovely son Seb made a reality!) and we placed these near the bell tent area; a mirror was also propped up against one which meant that the lady guests had a nice area to preen themselves in!

Debi's parents on the other hand got green fingered, and prepared a lovely floral arch for Debi and Lucas to get married under which looked simply stunning. And her dad painted some wedding chairs for them too!

Debi’s stunning apricot coloured wedding dress made David Austen’s romantic Juliet rose a perfect match; and I also added gypsophila and asparagus fern (the latter being Lucas’ favourite) to create the most magical of vintage bouquets.

As the nine (yes 9!!) bridesmaids had knee length dresses in busy floral patterns, we agreed to make their bouquets out of lacy gypsophila to ensure there was no clashing of colours.

The hair slides for the bridesmaids were made out of raspberry coloured lizzies as were the buttonholes for the seven (yes 7!!) bestmen.

While for Debi’s long blonde locks, I wired tiny pink and cream spray roses (Mimi Eden) which her hairdresser then carefully secured to the back of her head. These same roses also featured in a ceramic butter dish in the marquee; a family heirloom from Lucas’ great grandma.

Finally, for the mums, I made corsages featuring the aforementioned Juliet rose, while the buttonholes for the two dads featured cream gerberas. And finally, finally... some home made confetti to throw!

Such a magical day in a truly magical setting; albeit rather hot at times what with the temperature nudging 30 degrees in the shade for most of the day!

And one of the most talked about happenings during the afternoon was when Lucas' drone flew above all the guests - they had all been placed in a heart shape beforehand - thus making a rather novel photo shoot... 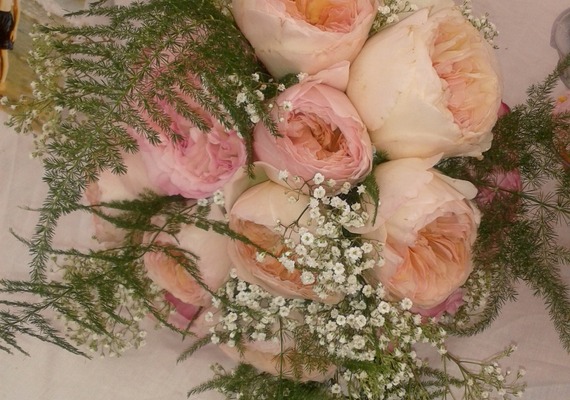 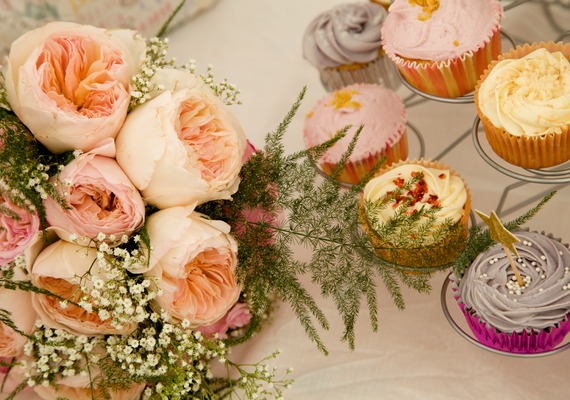 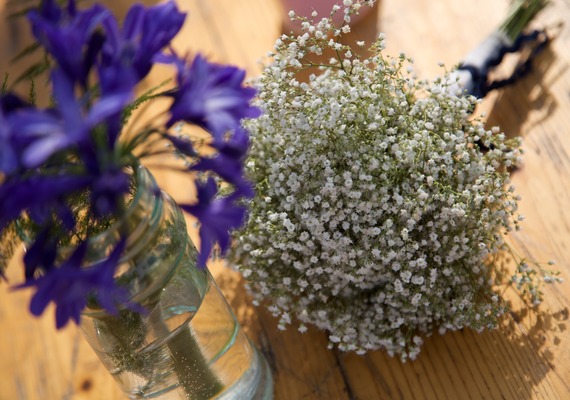 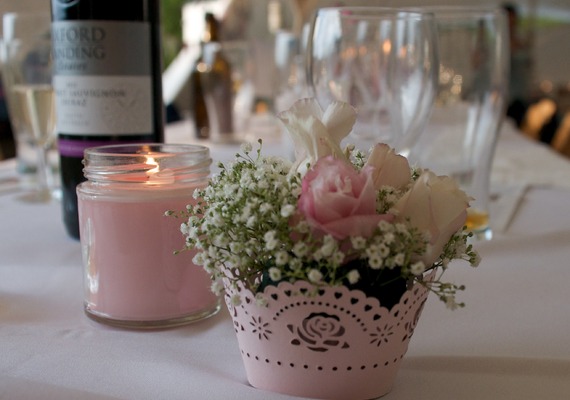 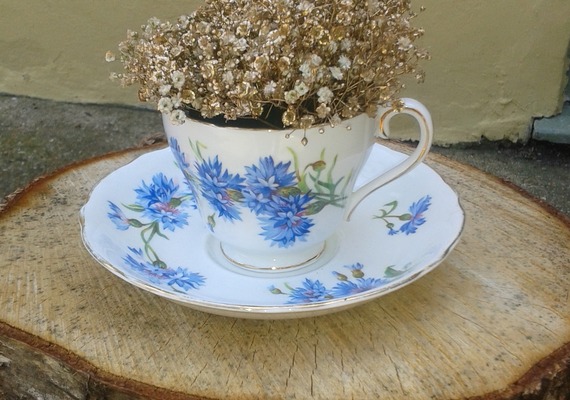 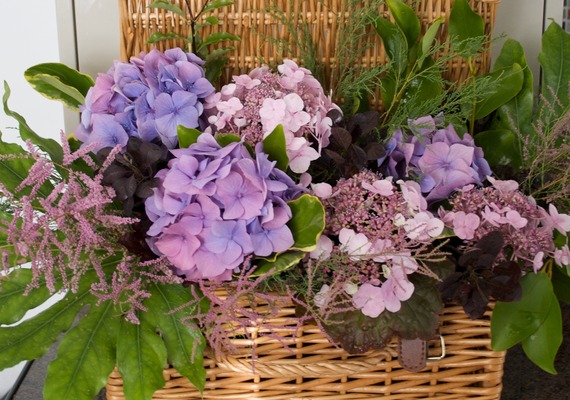 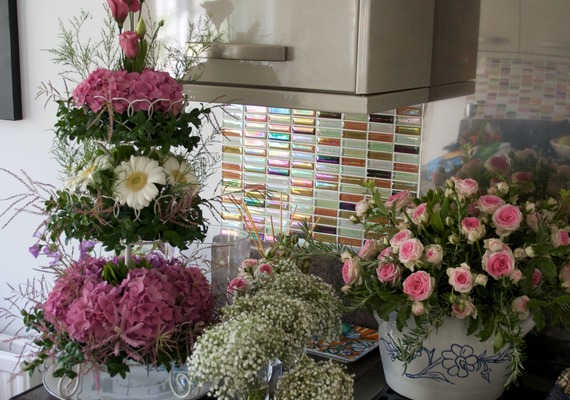 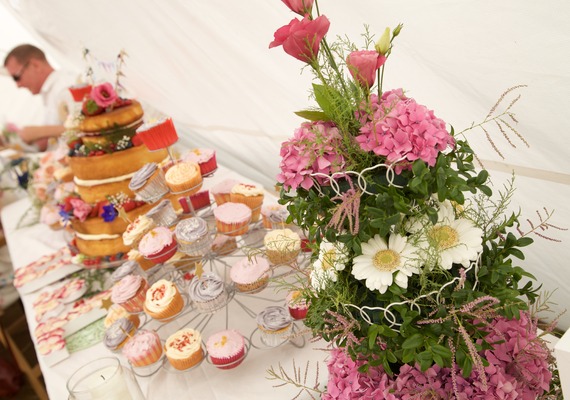 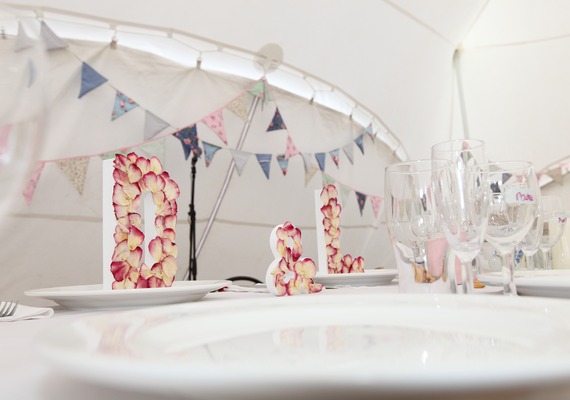 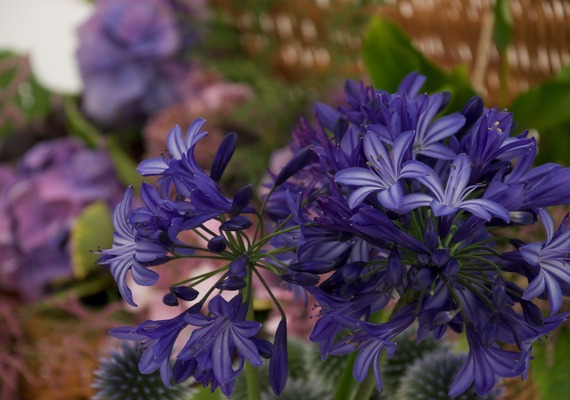 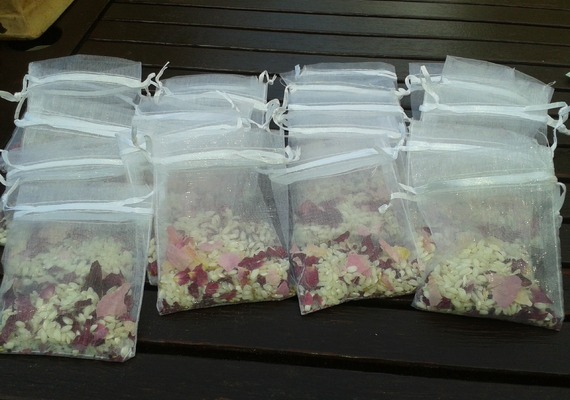 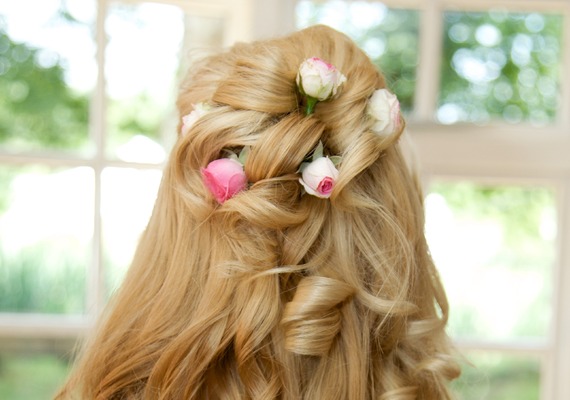 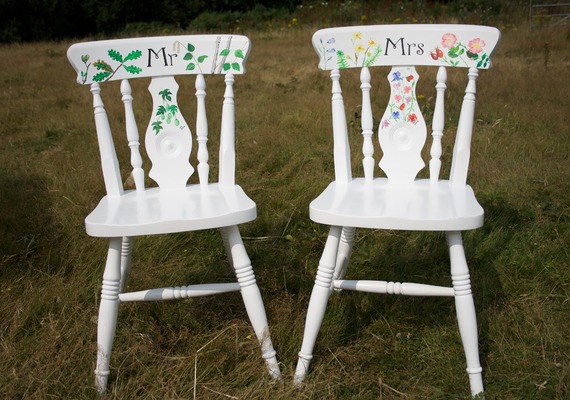 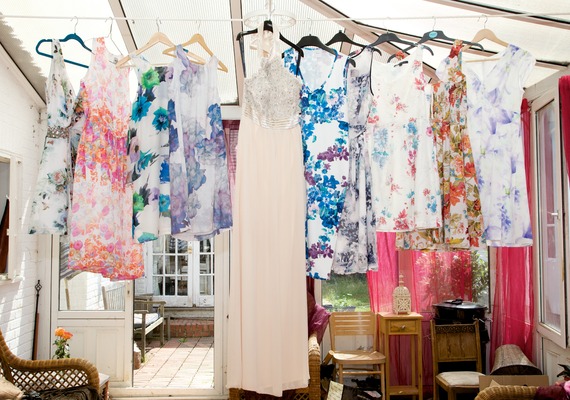 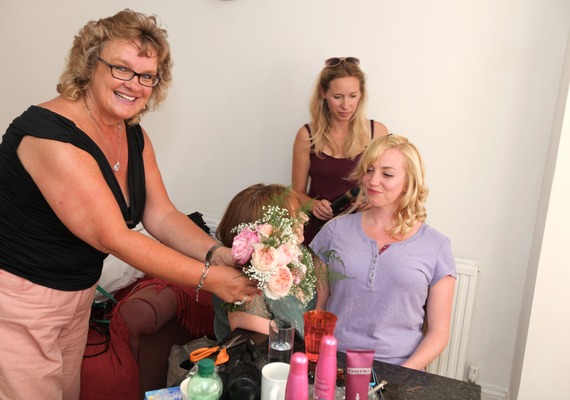 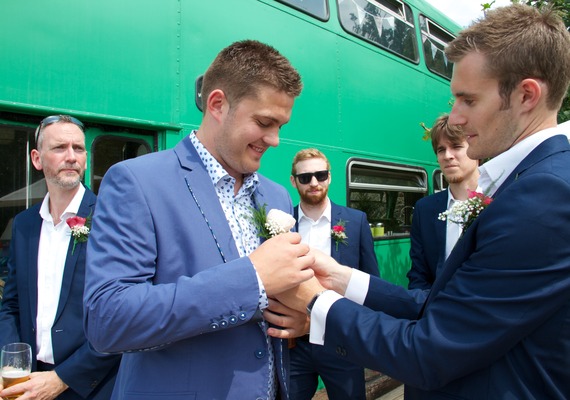 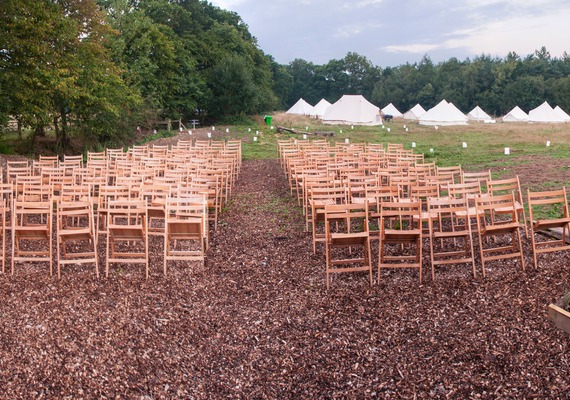 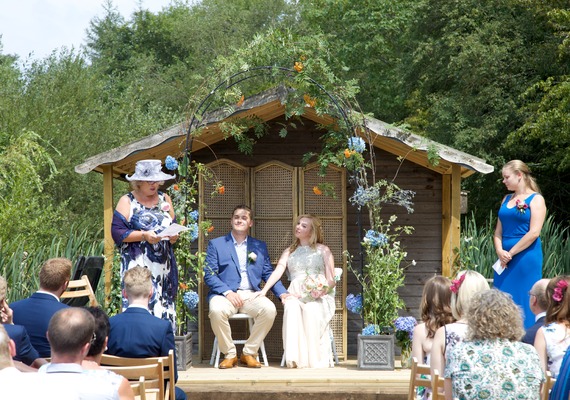 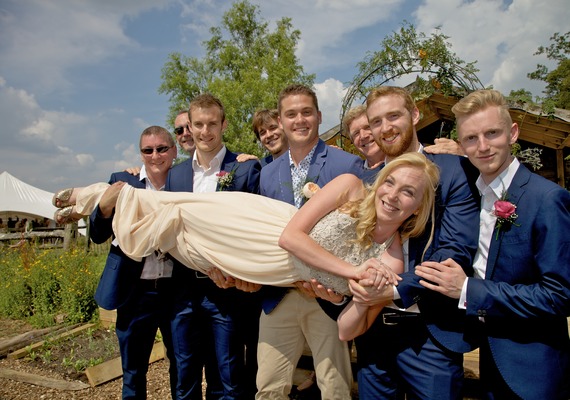 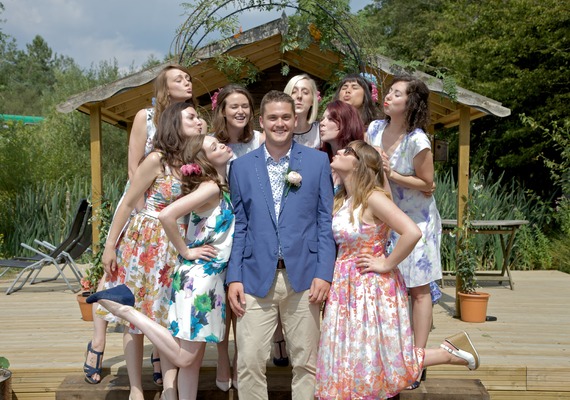 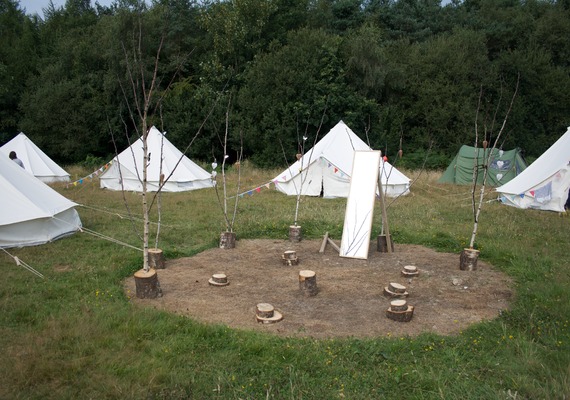 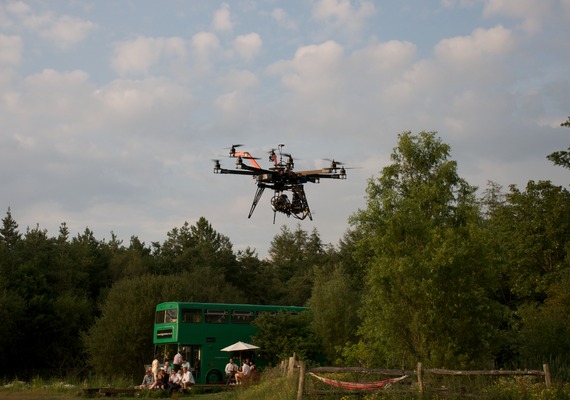 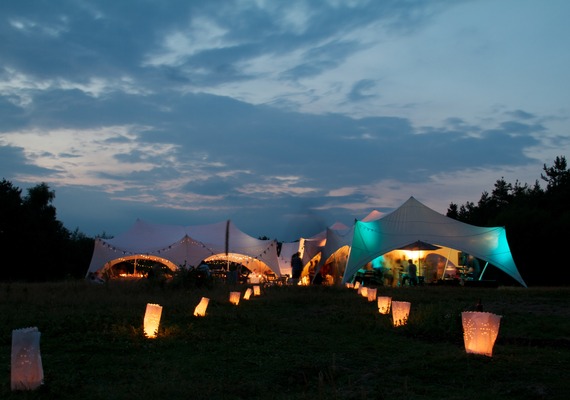 Are you planning a theme similar to this? If so, fill out the form below and I’ll be in touch!